CAMBRIDGE STYMIES WARREN IN SECOND HALF FOR 42-23 ROAD VICTORY 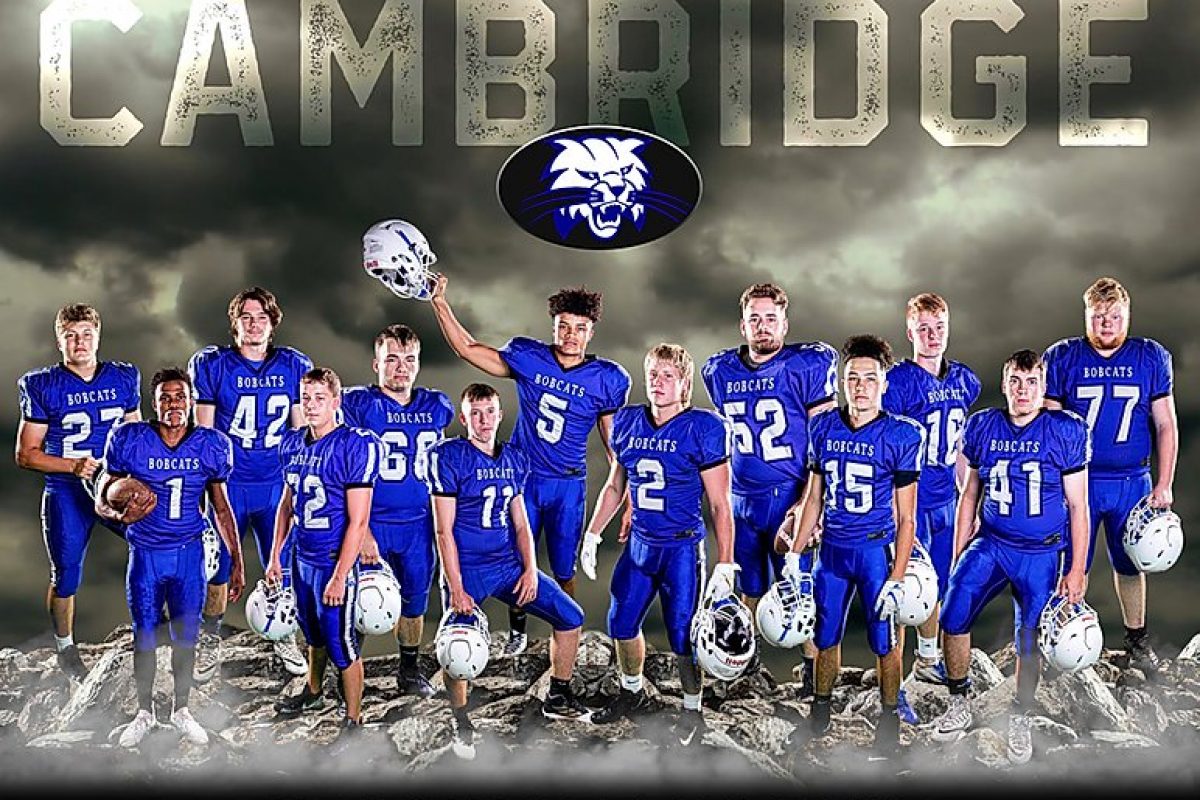 VINCENT – When an opponent had averaged 44.3 points per game and was holding a 23-21 edge at the half, most coaches would have cause for concern. On Friday night, that wasn’t the case with Cambridge High School head coach Josh Lowery. Once again, his team’s defense rose to the occasion, pitching a shutout in the final 24 minutes of action while scoring 21 unanswered points on offense to leave Warren High School with a convincing 42-23 victory.

Lowery was pleased with his team’s defensive effort, particularly in the second half.

“We preach to our kids every day that we have to finish everything we do. We faced some adversity in the first half against a much improved Warren Local team, but we made some adjustments and told the boys to have fun and play our style of football. In the second half, that’s what we did.”

Cambridge got off to a rocky start, however, fumbling the pigskin on its very first play from scrimmage. Warren defensive lineman Dylan Keife was able to force the fumble as Evan Gandee recovered for Warren at the Cambridge 23-yard line. Five plays later, quarterback Kurt Taylor hooked up with tight end Josh Welch for a seven-yard scoring strike, giving the hosts an early 6-0 edge just 2:26 into the game.

Cambridge didn’t waste any time letting Warren get excited about its lead as the Bobcats put together a six-play, 59-yard answer, capped off by an 11-yard touchdown strike from senior quarterback Cody Moore to senior Lattrell Payton. Sophomore Andrew Filippis, perhaps the best kicker in the area, nailed the point-after for a 7-6 CHS edge at the 0:42 mark of the opening frame.

Cambridge (2-2) increased its lead to 14-6 at the 11:31 mark of the second quarter as senior running back Travon Jeffrey plowed into the end zone from one yard out. Filippis again tacked on the PAT.

After offensive issues with fumbles and penalties early in the season, coach Lowery was asked if he had the “oh no, here we go again” feeling after Cambridge’s rocky start.

“It was more like, why do we keep shooting ourselves in the foot and putting the defense in tough situations? With that being said, our defense held things together long enough for our offense to get going,” he said. “Friday night was a great team effort on offense. I felt like we got more people involved and put some pressure on their defense. When we can get this going with Travon running the football…it opens up things for Cody and our passing game. I felt Travon ran the ball hard.

“Cody threw the ball well and also ran the ball with success. I am also happy with the way our offensive line performed. They created holes for our running game and protected Cody when we passed the football,” Lowery added.

Warren (2-2) answered Cambridge’s long scoring march with one of its own, putting together a solid seven-play, 62-yard drive that was capped off by another Taylor touchdown toss, this time a four-yard connection to Gandee at the 8:19 mark. The two-point attempt failed, but Warren had pulled within two at 14-12.

After Cambridge’s next drive stalled and was forced to punt, Warren set up shop at the visitor’s 45-yard line. Taylor, Warren’s offensive star of the game, connected moments later with Thomas Miller for an 11-yard score. Taylor then added the two-point run, giving Warren a 20-14 lead with 5:55 left in the first half.

The see-saw affair continued as Cambridge answered the bell again. The Bobcats marched 65 yards to paydirt, with 31 yards coming from the legs of Jeffrey. The drive was capped off by Moore finding an open Sean Perkins for a seven-yard score. Filippis’ kick was good, giving the Bobcats a 21-20 edge at the 2:16 juncture.

Warren then executed a perfect NFL-like two-minute drill, which was completed by Joel Chevalier’s 42-yard boot as time expired, giving the Warriors a 23-21 halftime cushion.

Cambridge’s defense saved its best effort for the second half as three interceptions – one each by Payton, junior Kaden Whaley, and senior Devaughnte Best – and a fumble recovery by junior Roman Jeffery kept the Warriors off the scoreboard. One of the interceptions came in the end zone and Whaley’s fumble recovery came at the CHS four-yard line.

After Warren’s Taylor was picked off in the end zone, the Bobcats put together their best drive of the 2019 campaign, traveling 80 yards in 11 plays, with Moore finishing off the drive by scampering into the end zone from four yards out. Filippis’ point-after gave Cambridge a 28-23 lead with 4:13 left in the third.

Early in the fourth, after a Warren punt, Cambridge faced a third-and-one situation from its own 45, but Jeffrey had more than just a first down in mind as he bounced off of several Warren would-be tacklers for a 55-yard touchdown run. With a fifth PAT by Filippis, the ’Cats held a 35-23 lead with 11:47 left in the game.

Jeffrey led CHS with 154 yards and two TDs on 27 carries, just one week after being named the KGP Pre-Game Show’s Co-Offensive Player of the Week. Moore finished 9-of-15 for 146 yards and two scores while adding 91 yards and a touchdown on eight attempts.

Taylor was a Drew Brees-like 34-of-53 for 388 yards and three TDs, giving him 15 on the young season. Gandee had a game-high 12 receptions for 121 yards and a TD while Miller finished with eight catches for 112 yards and a score.

NEXT–Cambridge travels to Nelson Field in Bellaire on Saturday for a 12:30 p.m. contest against the Big Reds. 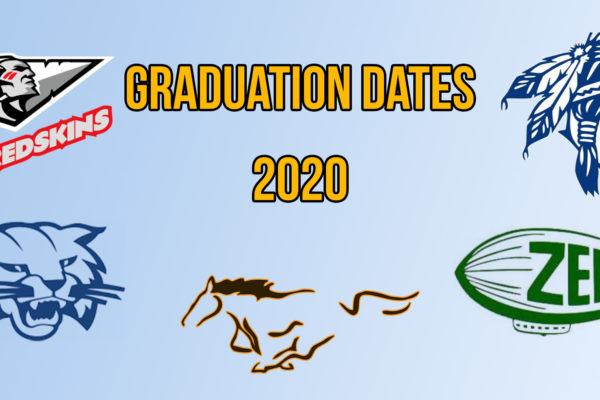 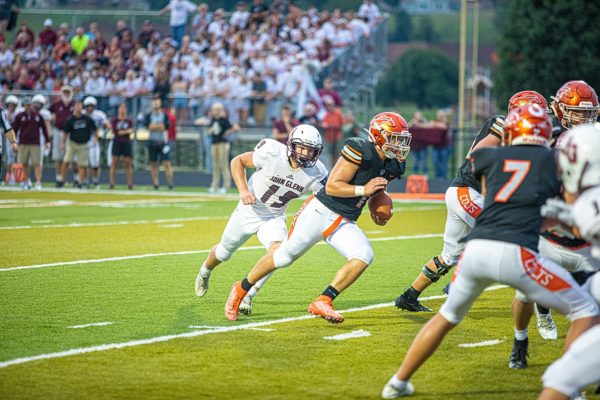 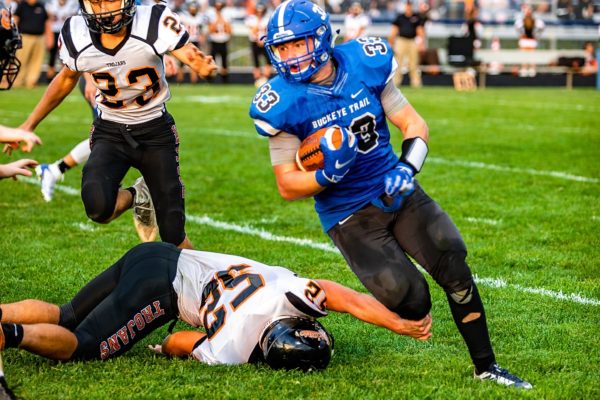